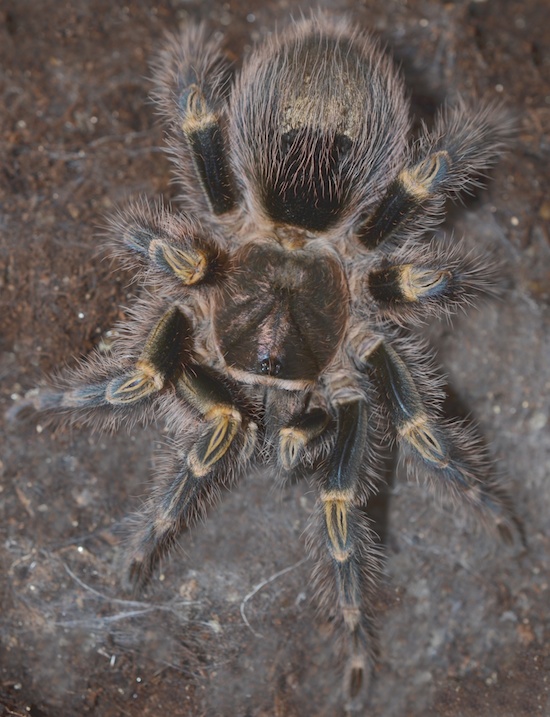 Written by admin on 27 July, 2020 in Main, Care Sheets, Grammostola
Formerly known as Grammostola aureostriata, Grammostola pulchripes or the Chaco golden knee tarantula is a popular beginner species. Dark in appearance with pink "hairs" and yellow striping on their knees this remarkably stunning tarantula can grow quite large for a Grammostola, I have had specimens nearly 8 inches in legspan! 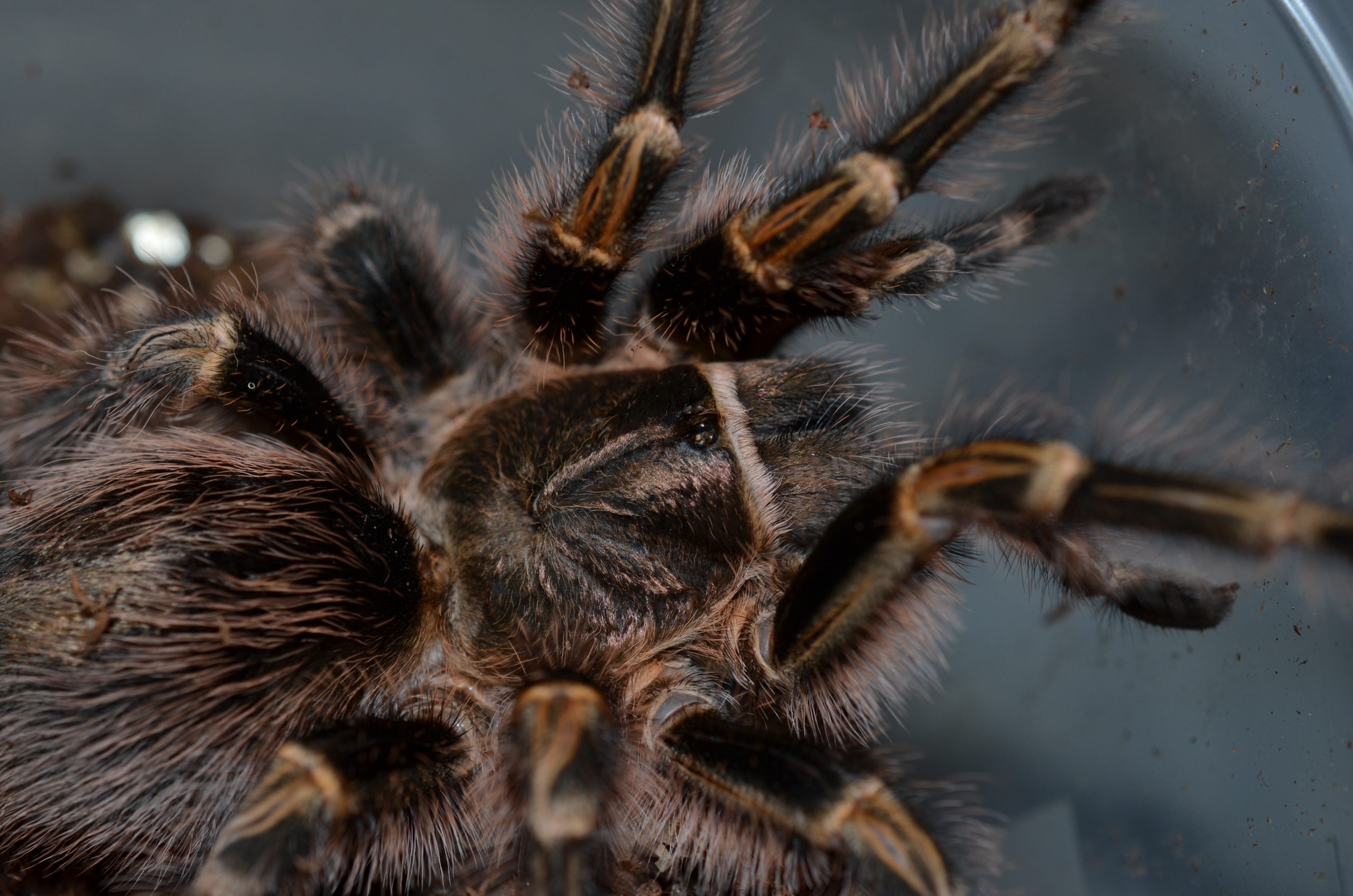 Known for it's coloring, longevity, hardiness and docile yet skittish nature the Chaco Golden Knee is also a slower-growing species. This heavy bodied tarantula is typically slower-moving as well. Smaller slings like to burrow while larger specimens are often content to adopt a hide, and are more likely to be out in the open for viewing. 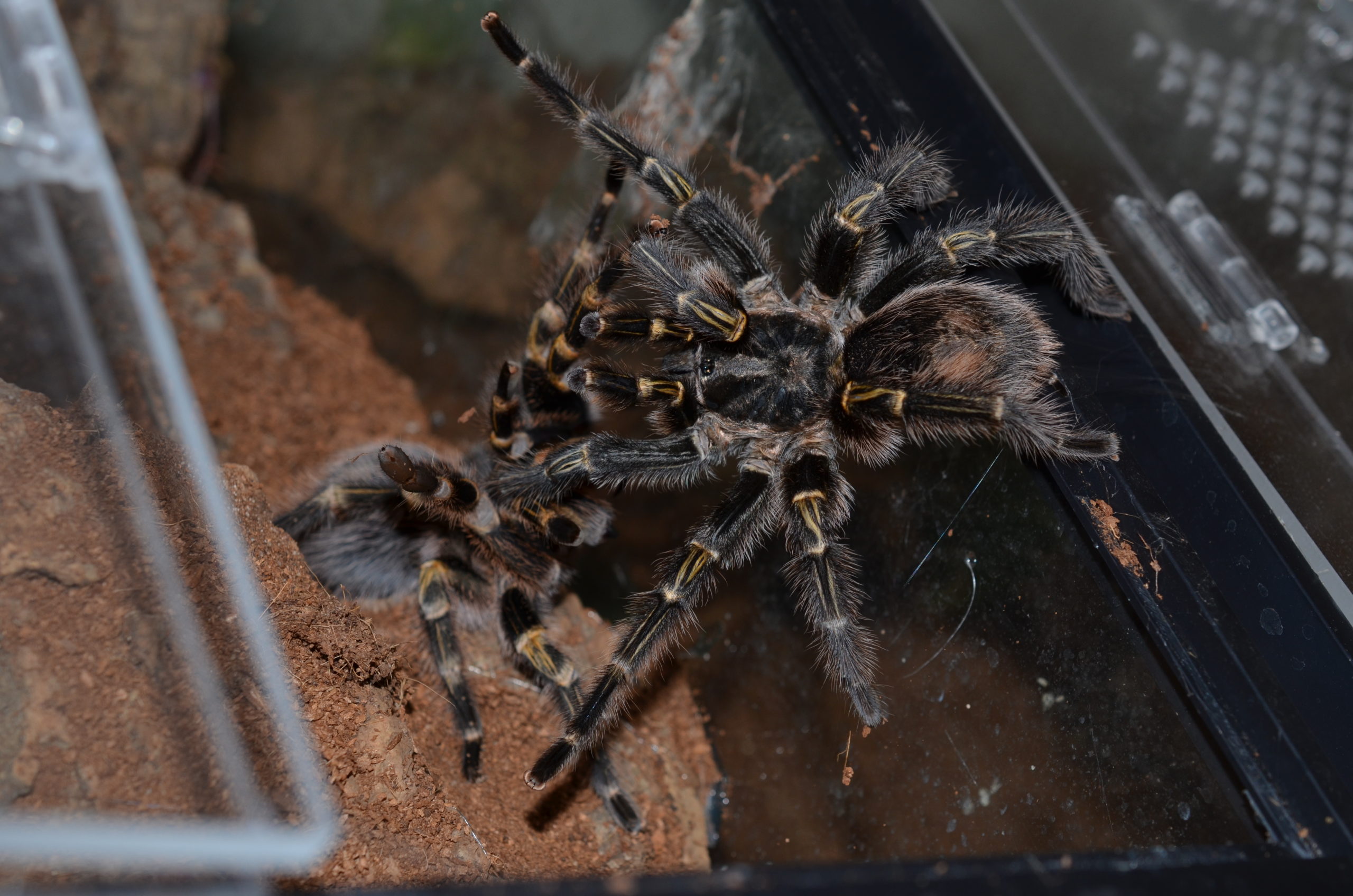 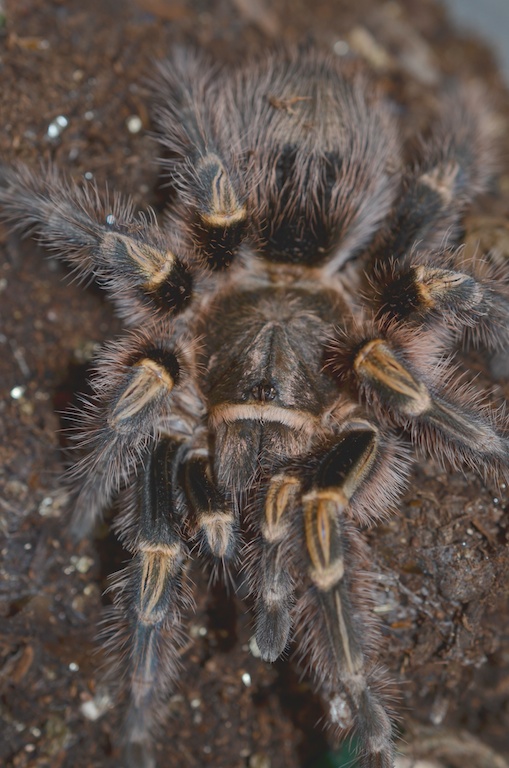 Temperament: Docile yet skittish. If agitated they may flee and/or flick urticating hairs. Bites from this species are rare.

Fun Fact: I have only been bit by a tarantula once, it was by a small 1-1.25" G. pulchripes who mistook my finger for food. It was  really my fault and understandable on the slings part. Keep in mind we had a pretty good feeding routine going for the past three years or so. The enclosure would be moved around, opened and then food would drop from the sky. This time was different as I intended to ship the spider. It's enclosure was moved and opened just as it had been for weekly feedings...but and instead of food came my finger. It was an honest mistake. I remember looking at its fangs sunk into my index finger wondering how to go about this without hurting the little guy. A second later the Chaco realized instead of a juicy roach it was fang deep in some giant's finger. The little bugger immediately let go and ran for it's life. I was able to safely intercept the tiny and terrified troublemaker. I still have naughty little "Feisty" as a beloved pet!

Substrate: While most adults will adopt a hide, slings often prefer to burrow. Cocofiber, vermiculite, peat moss and/or potting soil (or a mix) are all excellent substrate choices. Please make sure the substrate you choose is organic and chemical/fertilizer free. Do not use sand, pebbles, rocks or wood chips or anything else that could potentially cut or injure the tarantula.

In many cases a larger specimen would rather adopt or retrofit an existing hide than create it's own from deep substrate. Cork tubes half buried in substrate are what we use for our adult females. The specimen will excavate one side of the cork tube to it's liking. I like to think this makes the tarantula feel “at home” while minimizing the time and effort for the spider to settle in.

Spiderlings will often desire to create their own home by excavating a burrow. A tarantula with this talent and preference for tunneling is referred to as an obligate burrower. To encourage this natural behavior we recommend semi-moist substrate at least twice, and ideally three times as deep as the tarantulas DLS. Both the  Terrestrial Spiderling and Terrestrial Juvenile Enclosure Kit can be set up to encourage burrowing.

Water: Larger spiders 2” and over should be provided with a shallow water dish in order to drink. The water bowl should be rinsed our every time it is refilled. Being a scrubland species they will not require as frequent misting as an arboreal species however, I recommend keeping one corner of the enclosure lightly misted, especially if there is no water bowl.

Feeding: Adults will eat every 6-14 days depending on the size of the spider and it's prey. Spiderlings should eat more often, every 5-10 days. Adults may be fed crickets, mealworms or roaches. Spiderlings under .75” can only eat food small enough for it to overpower. This includes pinhead crickets, flightless fruit flies & freshly hatched "pinhead" rusty red roaches. It is not advised to feed your tarantula wild-caught food. It could contain parasites or pesticides that could be fatal to your pet. Keep your tarantulas enclosure clean. food waste left in the enclosure will invite mold, mildew, mites, flies and other pests. It is advised to remove uneaten prey items after 3-12 hours. If using a feeder who will not “bother” a tarantula such as dubia roaches it is alright to leave them in the enclosure as long as they are not causing stress to the specimen. A more detailed feeding, misting & troubleshooting guide can be found here: https://jamiestarantulas.com/guides/